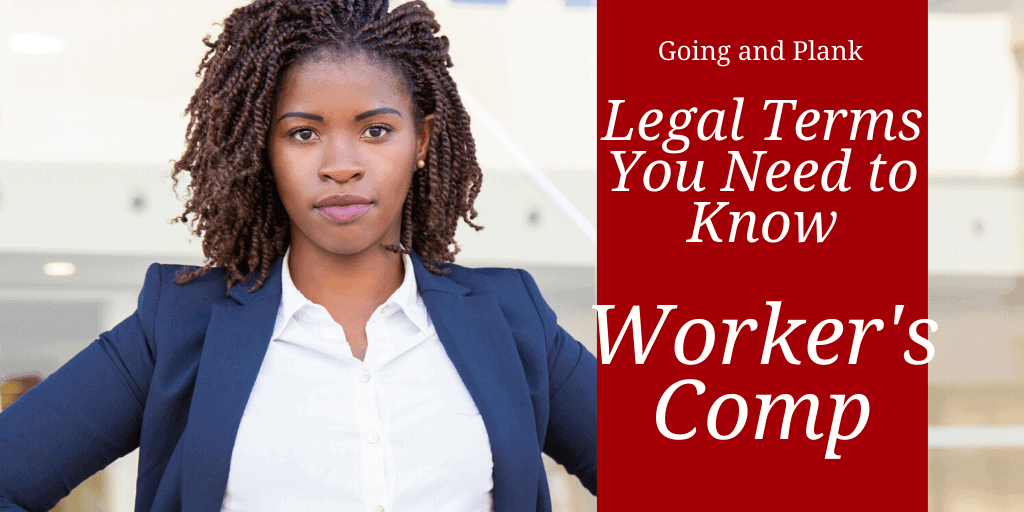 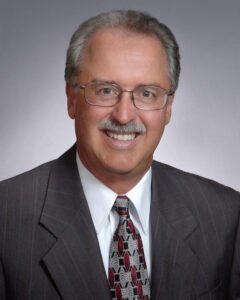 Most people don’t go to work expecting to get hurt, but accidents happen. Over 172,000 workplace injuries and illnesses were reported in Pennsylvania in 2019. Although not all workplace injuries are serious, many keep workers from doing their jobs, resulting in lost wages and mounting medical bills.

Like all states, Pennsylvania requires most businesses to carry workers’ compensation insurance that provides wage and medical benefits to employees who become ill or injured on the job. However, getting those benefits is not as easy as it seems. Lancaster County employees who suffer a work-related illness or injury are wise to consult an experienced workers’ comp attorney to ensure they get the compensation they deserve.

The workers’ compensation claim process can be complicated. Understanding these legal terms can help.

Another name for an accepted claim.

In cases where there is a dispute over a doctor’s recommended treatment plan or the cause of an injury, a worker may need an agreed medical evaluation. An AME is a medical examination by an unbiased doctor who is agreed upon by both the injured employee’s worker’s compensation attorney and the insurance company’s attorney. Since such evaluations can have a significant impact on the outcome of a claim, the injured worker should have an experienced workers’ comp lawyer who can ensure the chosen doctor will not favor the insurance company.

If a physician determines that an injured worker cannot return to the job he had at the time of his injury, an employer may have the option of offering alternative work. Often referred to as light-duty or modified work, alternative work must meet the employee’s medical restrictions,

The Americans With Disabilities Act is a federal law that prohibits discrimination against people with disabilities. If an employee has a permanent physical restriction due to an on-the-job injury, an employer may have to offer them a reasonable accommodation under the ADA, such as a modified workspace or schedule.

The acronym AOE/COE stands for ‘arising out of and occurring in the course of employment. It refers to the fact that injuries must occur during work hours, on work property, and during work-related activity for them to qualify for workers’ compensation coverage.

The Workers’ Compensation Appeal Board decides appeals of decisions from judges throughout Pennsylvania in cases involving work-related injuries, death, or illness. The board decides whether a judge committed an error of law or whether there was sufficient evidence to support the original decision. There are time limits involved in every step of the workers’ comp appeals process, along with paperwork to file, and data and evidence to collect. That’s why anyone filing an appeal should enlist the support of an experienced workmans’ comp lawyer.

A workers’ comp insurance premium is initially based upon an estimate of an employer’s payroll. At the end of the policy term, the insurance carrier will request an audit to confirm the payroll, the classification of all employees, overtime, and other expenses, as well as payment to subcontractors. Employers who overestimated their total payroll for the previous year will get a refund or a credit. Those who underestimated will get a bill.

The benefit structure is the part of the workers’ compensation insurance policy that defines what compensation an employee may receive when they sustain injuries on the job. Depending on the nature and severity of the injury, those benefits may include medical expenses, temporary disability benefits, permanent disability benefits, vocational rehabilitation services, and death benefits.

Challenge means to disagree with or dispute. In the case of a workers’ comp claim, an employer may challenge or attempt to deny a claim if they believe the injury isn’t serious or didn’t occur in the workplace, if there were no witnesses to the injury, if the claim isn’t filed in time, or if there are discrepancies between medical records and the accident report. An employee’s workmans’ comp lawyer can help compile the evidence necessary to support a claim. 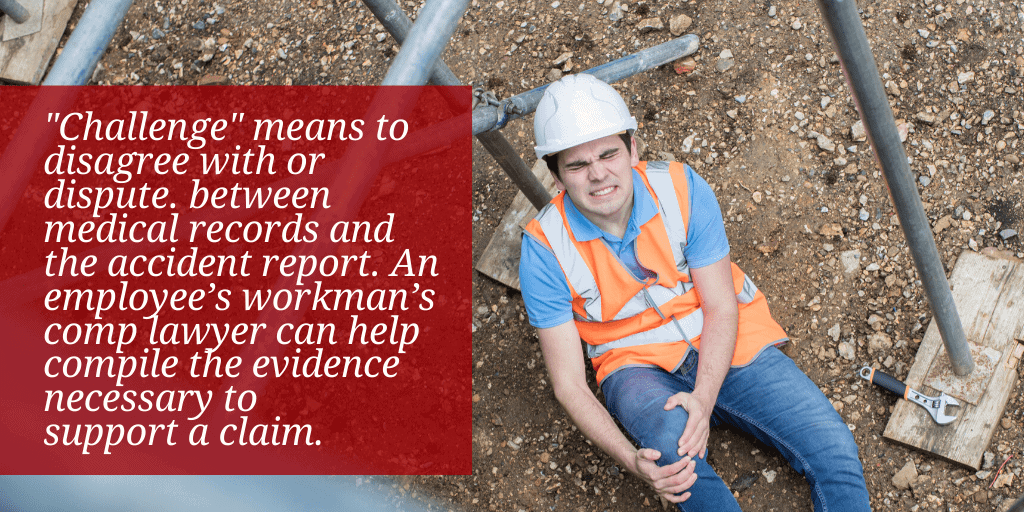 The form an employee uses to report a work injury or illness to an employer.

Any business or profession that could potentially expose an employee to injury has a classification code, a three- or four-digit number assigned based on the amount of risk involved and the base premium cost of workers’ compensation insurance. The code system ensures the fair distribution of insurance costs, with riskier businesses paying higher premiums.

The benefits a worker will receive from a workers’ comp claim to cover lost wages due to a work-related illness or injury.

Compromise and release is a type of workers’ compensation settlement in which the injured worker and the employer’s insurance company agree on a lump-sum payment. The agreement also releases the insurance company from any further liability or future payments related to the worker’s injury or illness.

A person who conducts work or a service for someone else under the terms of a contract.

A person hired to oversee or manage a building project.

The period of time that an active workers’ compensation policy is in effect.

Cumulative trauma refers to an illness or injury that occurs due to repeated activity or exposure on the job, rather than one specific incident or accident. Such injuries might include respiratory issues from constant exposure to chemicals or carpal tunnel syndrome from repetitive typing over time.

A declaration of readiness is a form requesting a hearing of a workers’ compensation case before a judge.

If something delays a workers’ comp claim, the claims administrator will send a delay letter explaining the reason for the delay as well as any additional information they may need to move the claims process forward.

If a worker’s compensation claims administrator determines that a worker’s illness or injury is not job-related, and therefore not covered by workers’ compensation insurance, they will deny the claim. There are many reasons for a denied claim, but it is important to remember that no denial is final. An experienced workers’ comp attorney can often file a successful appeal.

A dispute is a disagreement. In the case of workers’ compensation claims, an employer or an insurance company may dispute how the injury or illness occurred or the benefits an injured employee deserves.

An explanation of the job functions an employee performs.

Exposures: a measure of vulnerability to loss

the basis against which losses are compared; i.e., the payroll or other measure of risk, by class

A proceeding before a judge who reviews the evidence and determines whether or not a worker will receive workman’s comp benefits.

In Pennsylvania, impairment ratings determine how disabled an injured employee is due to their workplace injury. If an evaluation determines a worker is disabled less than a certain percentage, it could limit the amount of their workers’ compensation benefits they receive.

An independent contractor does work for individuals or businesses for payment, but unlike an employee, they typically use their own equipment and determine where and during what hours they complete their contracted work. Under Pennsylvania law, independent contractors are not eligible for workers’ compensation coverage.

If a law or contract is in force, it means it is currently in effect and people must obey it.

Insurance companies perform audits to ensure that the premiums employers are paying for their workers’ compensation insurance accurately reflect the risk. They verify that employers correctly classify their employees and that payrolls are accurate. Mail audits are the simplest form of such audits and allow businesses to complete a form and submit it to the insurance company.

Maximum medical improvement means a doctor has determined that an injured worker has improved as much as medically possible and is not likely to have any further significant improvement in the future.

If an injured worker is unable to return to normal duties, an employer may offer them modified, or light-duty work that accommodates their work restrictions. As long as the employer is acting in good faith, it is typically not wise for an employee to turn down modified work since it could jeopardize their workers’ compensation benefits. 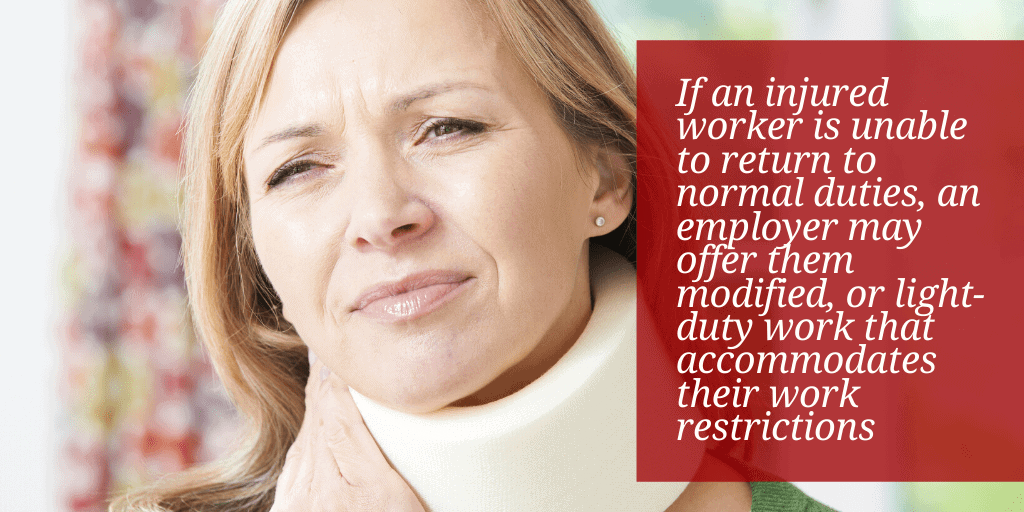 The Occupational Safety and Health Administration is a federal agency that sets and enforces workplace health and safety standards to reduce illnesses and injuries. Those can include everything from requiring employers to provide proper safety equipment to establishing exposure limits for toxic substances. OSHA also offers safety seminars and training, as well as onsite consultations to identify workplace hazards. Penalties for failing to comply with OSHA standards can include fines, legal action, and halting business operations.

A judge may award penalties to an injured worker should an insurance company violate the Pennsylvania Workers Compensation Act. Such violations might include failing to investigate a claim, refusing to pay medical bills, or stopping weekly checks without reason. A judge may award an employee up to 50% of the compensation award, plus interest, for excessive and unreasonable delays.

Compensation paid to an employee who has suffered a work-related injury or illness that results in permanent disability.

Rather than a temporary position for a worker who is still recovering from injury or illness, a permanent modified position is a long-term job that an employee can perform under medical restrictions when a doctor determines they have a permanent work-related disability that will make it impossible for them to return to their original job.

In cases where a worker suffers a permanent partial disability and returns to work for fewer hours and less pay, PPD benefits pay two-thirds of the difference in lost wages. A worker can collect partial lost wage benefits for a maximum of 500 weeks.

In cases where a work-related injury or illness leaves a worker unable to return to employment of any kind, PTD benefits pay two-thirds of their average weekly salary at the time of injury up to a certain maximum, along with payment of injury-related medical bills, for as long as they live. If they also receive Social Security disability benefits, the total of both benefits can’t exceed 80% of their earnings.

The time period for which a workers’ comp insurance policy provides coverage.

In Pennsylvania, injured workers typically can’t file a lawsuit against their employer as long as the employer provides workers’ compensation insurance. However, there are some exceptions if the worker can show that the employer engaged in willful misconduct, such as fraud, misrepresentation, or misleading investigators.

Injured employees often find the workers’ compensation claim process complicated and time-consuming. They often make simple mistakes that can result in a denied claim. An experienced workers’ compensation attorney can guide them through the claims process or help them appeal a denied claim. The Law Offices of Going and Plank in downtown Lancaster can help Lancaster County workers meet state deadlines, collect evidence, and help them secure the maximum benefits. Contact Going and Plank today for a free consultation.

Want to find out more about dealing with a denied Workers’ Compensation claim? Read these articles and blogs:

Workers’ Comp: Can You Appeal a Denied Claim?

Why are Workers’ Comp Claims Denied in PA?

Denied Workers’ Comp Claims Happen, But They Can be Appealed

We Answer Questions About Denied Workers’ Compensation Claims in Pennsylvania

Why are Workers’ Compensation Claims Denied in Pennsylvania?

Worried About Filing for Workers’ Compensation? Knowing These Terms can Help.