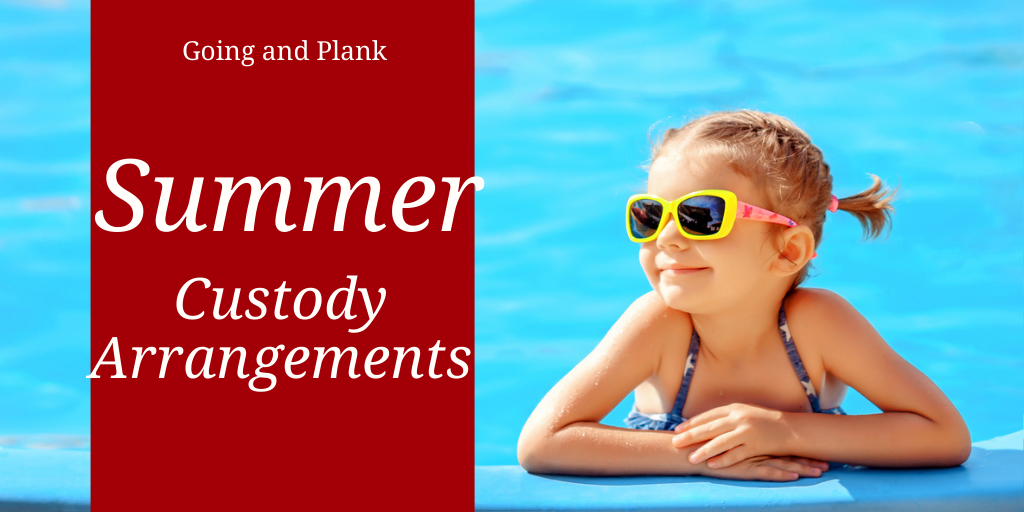 Children mature and change so quickly. Those changes seem especially apparent at the end of the school year when parents look at their kids and fully recognize how much they’ve grown in the past few months.

Maybe that’s why, when summer rolls around, some families want to revisit custody agreements. Perhaps a child’s evolving schedule or activities mandate a change. For example, parents may wish to make accommodations for summer camp, vacations, or other activities. But making changes in custody agreements is rarely simple or straightforward.

As a custody attorney, it’s my job to help map out agreements that are in the child’s best interests and suit each family’s unique circumstances. There are many types of arrangements to consider.

A 50/50 visitation schedule can work well if parents live near one another, preferably in the same school district. However, if both parents work and children participate in extracurricular activities, 50/50 schedules could require a lot of coordination.

Not all 50/50 schedules are alike. And Alternating Weeks Custody allows a child to spend one week with one parent and the following week with the other. This arrangement limits exchanges and provides both predictability and equal time with each parent. However, some children (and parents) struggle when spending a week apart.

The Two Weeks Each Schedule is similar. A child spends two weeks with one parent, then two weeks with the other. If school is not a factor, this schedule works for moms and dads who live further apart. It also requires fewer exchanges. But, again, some families will struggle when spending two weeks apart.

Some parents opt for the Alternating Every Two Days Schedule to reduce time apart from the kids. The child switches between parents every two days. Shorter times apart often work well for families with younger children, but this isn’t always practical for school-aged children or for parents who live far apart. 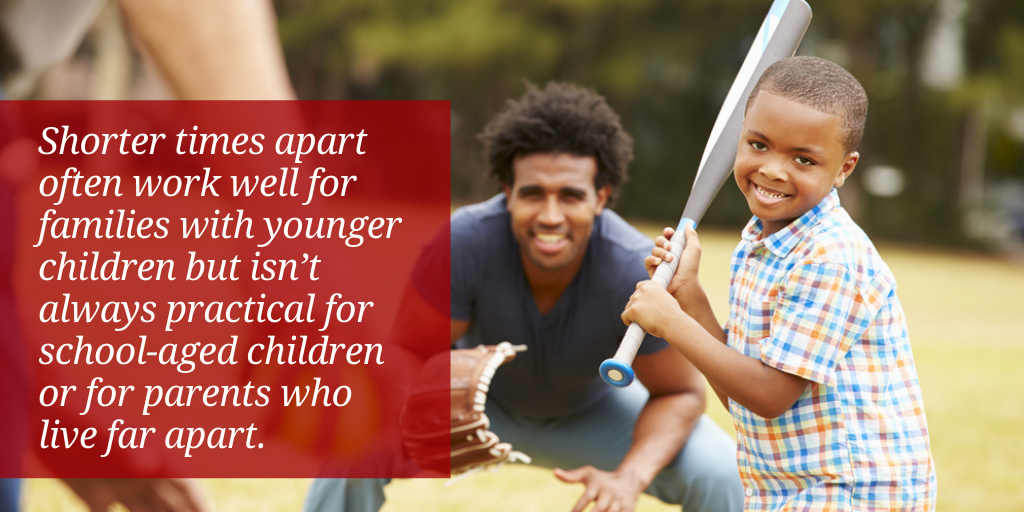 The 2-2-5-5 Schedule is more straightforward than it sounds. A child lives with one parent for two days, spends two days with the other parent, and then switches to a five-day rotation. Times apart are still shorter, but that also means frequent exchanges. With a varying schedule, the days of exchanges change, which can be problematic for some families.

Another variation is the 3-4-4-3 Custody Schedule. In week one, a child is with one parent for three days of the week and with the other for four days. The first parent then has four days in week two, and the second has three. While it sounds complicated, both parents have set days of custody three days a week, and only the fourth day alternates.

With a 2-2-3 Custody Schedule, a child spends two days of the week with one parent, then two days with the other, and back with the first parent for the last three days. The schedule switches the following week. Some parents appreciate the short separations. Others find the frequent handoffs to be challenging.

Sometimes a 50/50 schedule isn’t possible. In these cases, parents sometimes opt for a 60/40 arrangement. This type of custody agreement also has many variations.

In a 4-3 Custody Schedule, the child spends four days with one parent and three days with the other, but not necessarily on the weekend. Some parents choose this arrangement because it allows both parents to regularly spend some weekday time and some weekend time with the child.

Schedules, distance, and a child’s needs may dictate choosing one of the following 70/30 custody schedules.

When a child always spends weekends with one parent, it’s called the Every Weekend Schedule. This schedule offers consistency and works for school-aged children who live far from one parent. However, because even children sometimes have weekend plans, this agreement is often modified to give a parent two out of every three weekends.

If a parent doesn’t want to commit to weekend-only custody, the 5-2 Custody Schedule offers the flexibility of a child spending five days at any time of the week with one parent and then spending two days with the other. So, for example, a child could potentially spend time with both parents during the week and spend one day of the weekend with each parent.

For children who don’t like to be away from a parent for too long, the Every Third Day Schedule enables a child to live with one parent for two days and the other parent for one. It requires frequent exchanges but ensures short absences.

For parents and children who are comfortable with more prolonged absences, the Every Third Week Custody Schedule allows kids to spend two weeks with one parent and one week with the other.

In some families, one caregiver may live far from the child’s school or have an especially demanding job. In these cases, one of the following 80/20 schedules may be appropriate.

In an Alternating Weekends Schedule, the child lives with one parent and visits the other every other weekend.

Some parents opt for an Every Third Weekend Schedule. This schedule may be preferred for children who find exchanges disruptive or by parents who live far apart. 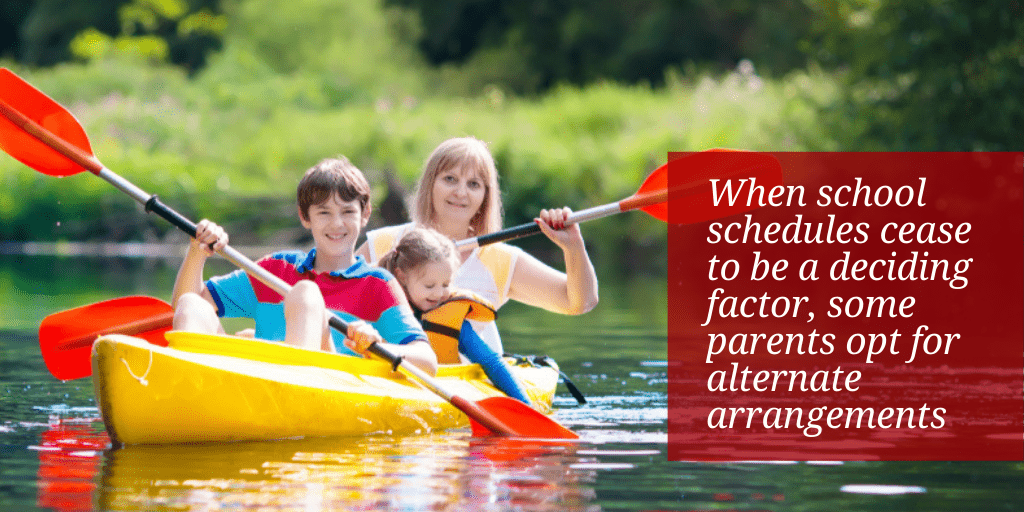 When school schedules cease to be a deciding factor, some parents opt for alternate arrangements. They may choose to switch days, lengthen or shorten custody duration, or switch custody proportions. For example, parents who choose an Every Weekend Schedule may find it’s now possible to change to an Alternating Weeks Schedule.

When parents live far apart, especially in different states, one parent may request custody over the summer or for a month or two at a time. Moms and dads may also make alternate custody plans to accommodate holidays or summer vacations.

Creating a custody agreement that benefits everyone can be challenging. Sometimes it helps to have an arbitrator who makes sure all arrangements are documented. As a Lancaster custody attorney with decades of experience, I can help. Contact the Law Offices of Going and Plank in downtown Lancaster for help with your custody needs.

Custody During the Holidays