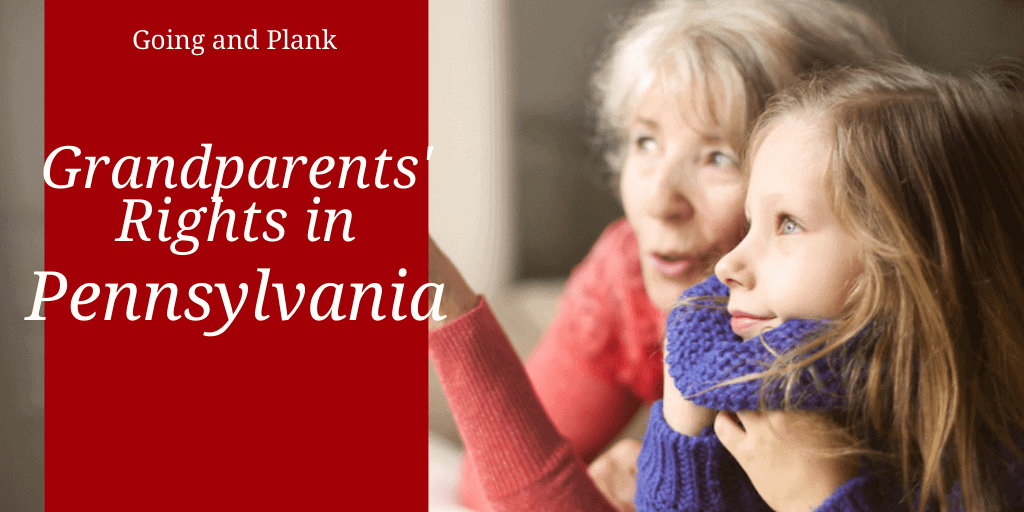 Grandparents have always played an important role in children’s lives, whether they make special visits a few times a year, serve as regular babysitters, or become live-in members of the family. Many grandparents enjoy these more traditional roles, but many others find themselves taking on more responsibility in raising their grandchildren.

Nationwide, the percentage of children raised by grandparents more than doubled between 1970 and 2010, from 3.2 percent to 7.3 percent, and it continues to grow. While it was often difficult in the past for grandparents to intervene in family situations, grandparents’ rights laws in Pennsylvania now give them legal options to step in when they have concerns about the health, safety, and happiness of their grandchildren.

Lancaster County grandparents who have legitimate concerns about the well-being of their grandchildren or who simply want to be a part of their lives can pursue their legal rights under many circumstances. Here are a few

Lancaster County Grandparents Can Pursue Visitation Rights After a Divorce

Divorce not only creates challenges in the relationship between parents and their children but also in the relationship between grandparents and their grandchildren. When parents divorce, grandparents may fear losing contact with their grandchildren. This is especially true for the parents of the noncustodial parent. However, in cases of divorce, grandparents do have options to seek certain forms of visitation. As with all issues concerning children and divorce, a judge will decide such cases based on what is in the best interests of the child. Under the Pennsylvania Custody and Grandparents’ Visitation Act, grandparents may seek visitation if the parents have already initiated custody proceedings.

Grandparents Can Seek Supportive Care in Cases of Chemical Dependency

The opioid crisis has wreaked havoc on American families, leaving many grandparents caring for their grandchildren while the parents fight addiction. Even when a parent is actively working to end their addiction, the process can be long and painful, and it may also require stays at addiction clinics. Pennsylvania’s custody act gives grandparents legal standing to step in and seek custody when they can show the court that a child is at substantial risk due to parental drug or alcohol abuse. Grandparents who fear their grandchildren may suffer from the trauma of living with an addicted parent should consult a Lancaster custody attorney and discuss the possibility of seeking primary custody to give the child a safe and stable home.

The death of a parent is a painful, life-changing event for a child. It is also painful for the grandparents, who may face the possibility that the child’s surviving parent will limit contact with the child. The court generally recognizes the importance of nurturing close family bonds. For that reason, when a parent dies in Pennsylvania the law allows the deceased parent’s parents to seek visitation or partial custody of their grandchildren. As always, the courts will consider the existing relationship as well as the wishes and well-being of the grandchild. Grandparents can also petition for partial custody or visitation in cases where the parents suffer from a mental illness or life-threatening disease that affects their ability to adequately care for their children.

Grandparents Can Seek Temporary Custody When Parents are in Prison

Grandparents do not need legal custody to care for their grandchildren for a week or even a month, but the situation changes when the parents do not have care or control of the child and the grandparents become caregivers for an extended period. In cases where one or both parents of a child are incarcerated, the grandparents may seek temporary custody or visitation rights. While grandparents can informally assume responsibility for the children if both parents are in prison, seeking custody through the courts will allow them to make important decisions on behalf of the child in the absence of the child’s parents.

Grandparents Who Are Sole Caregivers May Seek Custody

Primary physical custody is a serious undertaking that requires caring for a child full time, taking on all parental duties, and assuming responsibility for the child’s health, wellness, and education. In cases where a grandparent has already taken on these duties and responsibilities, the court may grant primary custody to keep the child connected to the adult who has acted as a parent and in the child’s best interests. Under Pennsylvania law, grandparents may seek primary custody of a grandchild if the grandparents’ relationship with the child began with the consent of the parents and the child lived with the grandparents for at least 12 months. If the child is no longer living with the grandparents, they must seek custodial rights within six months of the child’s removal from their home. Grandparents who have assumed sole responsibility for the care of their grandchildren for a year or more should contact a Lancaster grandparents’ rights lawyer to see if they have a strong case for custody.

Grandparents naturally want to protect their grandchildren if they fear they are in danger of abuse, physical harm, or mental anguish. In Pennsylvania, child abuse can take many forms, including sexual, emotional, and physical abuse. It can also include neglect and abandonment, such as a failure to provide regular meals, supervision, emotional support, care, and attention to educational needs. Grandparents can seek full physical and legal custody of their grandchildren in such situations, but they can’t make a case on suspicion alone. A Lancaster grandparents’ rights lawyer can help research parental behavior, get testimonials, and gather evidence to create a strong case for custody.

Custody During the Holidays