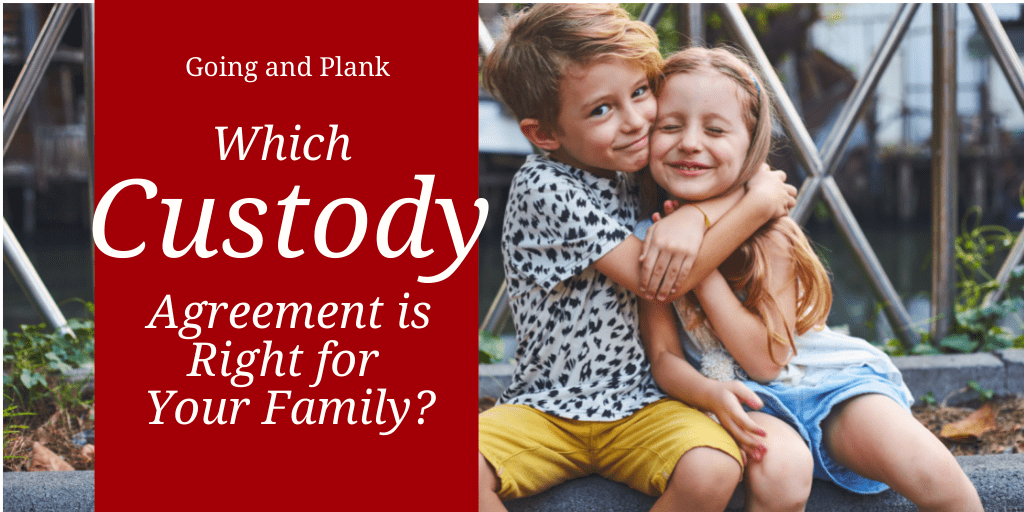 Marriages ending in divorce are never easy, especially when kids are involved. But one thing that can make it a little less stressful for the children is figuring out the best custody agreement for all parties involved. A good custody agreement can create a solid foundation for the future and can go a long way in diffusing emotional tension moving forward. However, hammering out that agreement can be almost as stressful as the divorce itself.

Fortunately, a qualified Lancaster custody attorney can help mediate the negotiations for a custody agreement. A well-written agreement clarifies which parent has primary legal and physical custody over the children and how time with the children will be balanced. Pennsylvania child custody laws will favor the plan that is best for the child. In most cases, that means that the child will have a relationship with both of the parents. A judge rarely finds sole custody to be the best choice unless one parent is deemed unfit or dangerous to the child.

In shared custody agreements, both parents have some degree of legal custody of the child, and each plays a role in parenting, educational, and medical decisions. Although both parents don’t always have equal physical custody, they have regular contact with their child.

One of the critical parts of a custody agreement is a legally binding visitation schedule that clearly spells out how the time with children will be split between each parent. A Lancaster family law lawyer can help map out an agreement that provides the best life for the child, is fair to each parent, and fits the family’s individual situation.

There are many custody schedules to consider, and even the best custody attorney in the world cannot know for sure what is best for someone else’s family, so here are some examples of when different arrangements might be more suitable:

Sometimes, parents will want to maintain an equal presence in their children’s lives. An equal-time custody agreement such as a 50/50 shared custody agreement may be the simplest solution for these families. However, for this kind of agreement to work well, there are some different factors to consider. It is important for parents to understand that 50/50 arrangements only work well if the parents live near each other, for instance, in the same school district. While equal time schedules can still work pretty well for parents living a long distance apart, it takes a lot of flexibility and coordination to make these schedules work. As always, it helps when the parents can communicate well.

One useful 50/50 schedule is Alternating Weeks Custody. As the name suggests, in this custody schedule the child spends one week with one parent and then spends the next week with their other parent. Similar to the “Two Weeks Each” schedule, this arrangement limits exchanges and gives the child a more stable environment, although it does have the possible drawback of separation anxiety.

Another good option for equal custody is the Two Weeks Each Schedule. In this arrangement, the child will stay with each parent for a period of two weeks and alternate between parents. In the event that both parents live approximately equal distances from the child’s school, or if the offspring is not attending school yet, the schedule allows parents to live a bit further apart than some other arrangements. However, in some cases, both parents and children struggle when separations lasting two weeks. 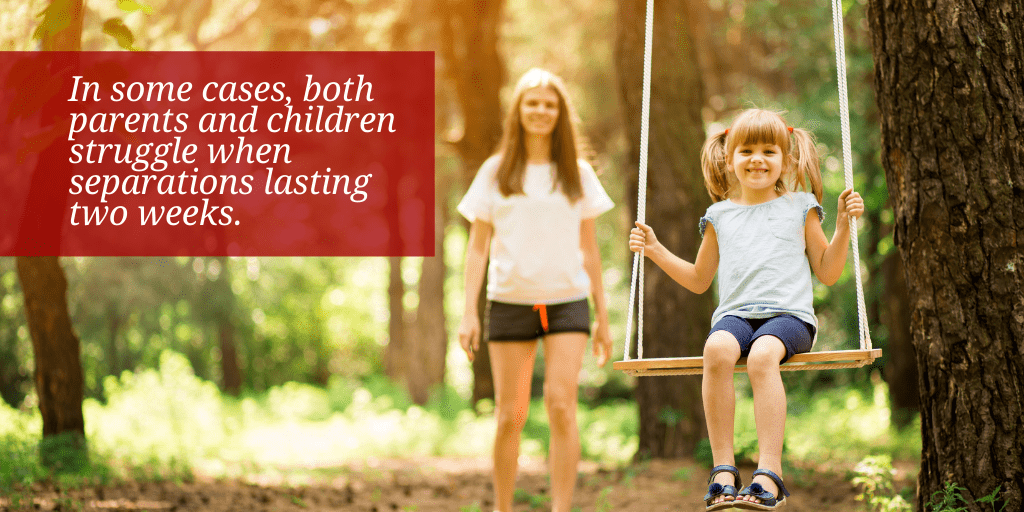 When do 60/40 Arrangements Work Best?

Schedules that split the child 60/40 between each parent work well in situations where one parent has a little more time to give to their child during the week. And despite being a little bit unequal, these agreements still make sure the child spends a lot of time with each parent. One big benefit: 60/40 schedules usually require far fewer meetings to hand over children than 50/50 schedules do.

The 18-12 Schedule is excellent for those parents who live apart with some distance or do not have the time for a lot of exchanges. In this arrangement, one parent gets the child for the first 18 or 19 days of the month, then the other parent has the child for the remaining 12 or 13 days of the month. Of course, this arrangement can be changed to fit the individual needs of different children and parents. While short months such as February can be a little complicated, this schedule allows everyone to settle into a clear routine with just one monthly handover.

In some cases, a child needs a more regular “home base,” or perhaps school schedules and distance means the parents cannot have an equal custody arrangement. In other cases, one parent may have an inconsistent or busy work schedule, spend a lot of time traveling, or live further away from the other parent. When these things happen, the following schedules can be better for children.

A common arrangement is the Every Weekend Schedule, in which the child spends their weekdays with one of their parents and weekends with the other. This schedule works best when one parent lives significantly further from a child’s school district, and it can offer more consistency for children. Still, one parent will miss out on weekdays and school routines, and the other parent will miss out on the child’s weekend activities.

A very similar arrangement, called the 5-2 Custody Schedule, is built on the same concept as the Every Weekend Schedule but allows parents to choose any two days of the week. This shift can allow parents to miss fewer weekend or weekday activities. 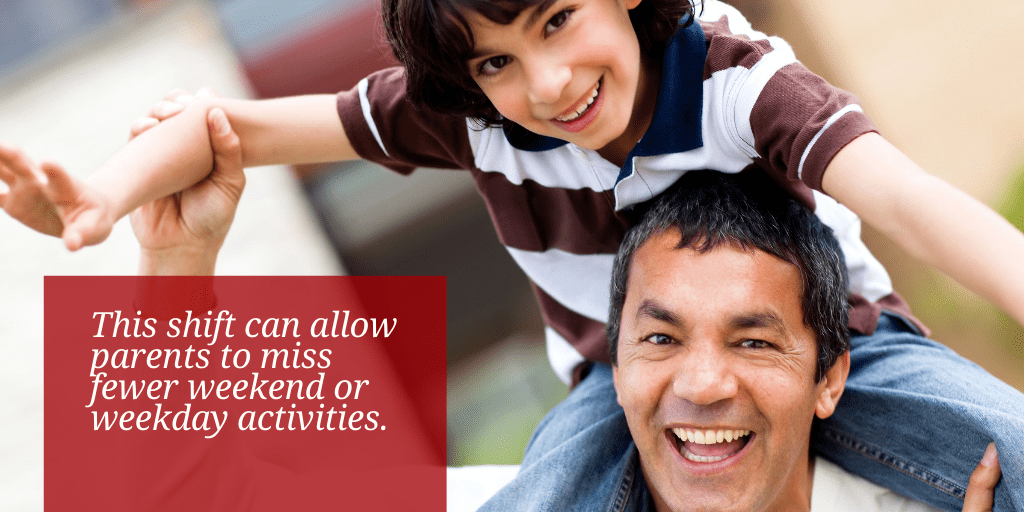 For those parents who want just one or two child handovers each month, the Every Third/Fourth Week Custody can be a good fit. In this agreement, the child spends 2-3 weeks with one parent, then a week with the other. As a result, there are fewer exchanges and more extended periods with each parent. Still, this schedule can cause some separation anxiety due to the prolonged absence of one parent at a time.

One option that fits well for parents wanting 2-3 monthly exchanges is the Alternating Weekends Schedule. This is similar to the Every Weekend schedule but switching parents every other weekend.

Finally, the Summers Only Schedule is an arrangement in which one parent has the child for summer break and the other watches over them for the remaining parts of the year. Many parents choose to alter this schedule so the child can visit the “summer parent” for a short period on certain holidays or at other points in the year, reducing the time the child goes without seeing that parent. A Lancaster custody lawyer can help work this into the legal language of the agreement.

Getting a Fair Custody Schedule

If it is time to create a custody agreement, a Lancaster County family attorney can help decide which arrangement will work best for the child, is fair to each parent, and suits a family’s unique circumstances. Contact us