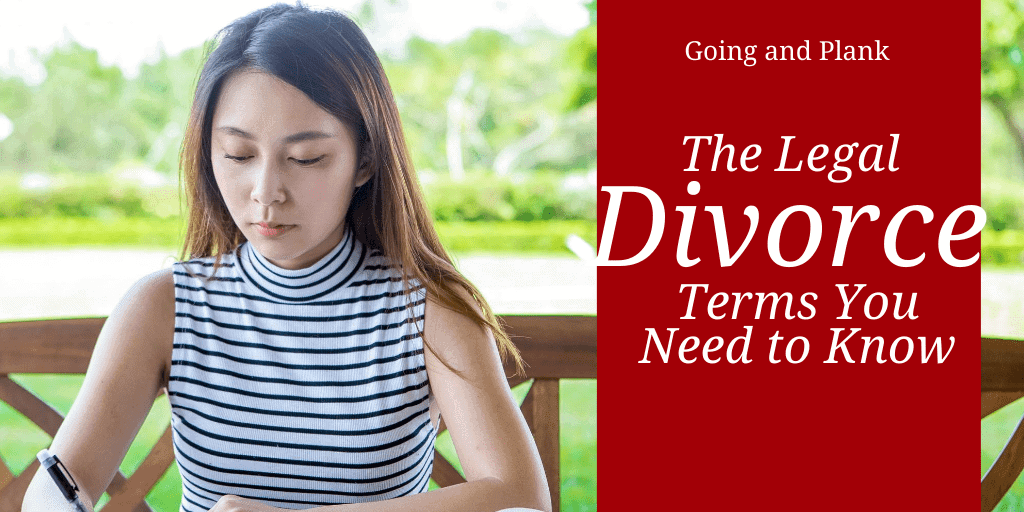 Divorce is difficult on many levels. Often both parties feel anger and hurt as well as worry over how the break-up of the marriage will affect their children. Added to an already stressful situation is an often complicated legal process that can make it easy for couples to make costly mistakes. Understanding these common legal terms can help.

An adversarial divorce is one in which the spouses cannot agree on the terms of the divorce in regard to a variety of issues, including spousal and child support, division of property and debts, custody, and visitation.

A lawsuit or a proceeding in court.

An affidavit is a written and sworn statement of fact made and signed before a notary public.

The resolution of a dispute. It can be verbal or written.

Also known as spousal support, alimony is a financial payment one spouse makes to support another during a separation or after divorce.

A legal proceeding available under limited circumstances that declares a marriage invalid, as if it never took place. The law still considers the children of an annulled marriage legitimate.

A written response to a petition for separation, divorce, or annulment. The answer contains an admission or denial of the allegations made in the petition.

If one party doesn’t agree with a court decision in a divorce case, they can file an appeal, which is a request for a higher court to review the decision to determine if the original judge did not correctly apply the law.

A common-law marriage is one in which two people who have the capacity to marry and express their intent to marry are considered legally married without the need for an officiant. Pennsylvania stopped recognizing common-law marriages in 2005. Couples who can prove they had entered into a common-law marriage before 2005 can go through divorce proceedings like any other married couple, meaning a court can decide issues like child custody and division of property.

The spouse who files for divorce.

A complaint is a petition filed with the court that initiates a divorce proceeding. The complaint includes the grounds for divorce, claims against the defendant, and a request to grant a divorce, divide property, and decide child custody and spousal support.

Condonation is the forgiveness of a marital transgression that would be considered grounds for divorce. A common example is a spouse who chooses to continue a marital relationship after learning that the other spouse committed adultery. Condonation can cause a roadblock if the innocent spouse decides later to seek a fault divorce on the grounds of adultery. The judge could deny a divorce on those grounds should the court find there was condonation or forgiveness of adultery.

In a contested divorce, the parties cannot agree, either about getting a divorce or about the terms of the divorce.

In a divorce based on fault, the spouse filing for divorce can bring a corroborative witness to court who will confirm their testimony and the grounds for divorce.

An instruction from the court telling someone what they must or must not do.

A written order that finalizes a divorce and includes the court’s decision on spousal support, child custody, and the division of property and debt.

A spouse is in default if they fail to file an answer to a petition for divorce or they fail to appear in court. In such cases, the judge may grant the divorce.

A deposition is a sworn statement made under oath but outside of court. Typically, an attorney will conduct the formal interview while a court reporter records the proceeding. In a divorce case, the questions can range from financial to parenting issues. A transcript of the deposition can be used as evidence at trial.

The pre-trial process of exchanging evidence and information between both sides in a divorce proceeding. Some forms of discovery might be requests for financial documents or sworn statements about issues relevant to the divorce case.

Another word for divorce, dissolution is the legal termination of a marriage.

The legal end of a marriage.

Equitable means fair, but not necessarily equal. In Pennsylvania, the method for dividing marital assets in a divorce is known as equitable distribution, meaning it won’t necessarily be a 50-50 split. A judge will look at factors such as the length of the marriage, the health of both parties, who will have custody of the children, prenuptial agreements, the income, and employability of both parties, whether one party advanced the income of the other, and more to determine a fair distribution of assets.

Submitting a legal document to the court, where it becomes part of public record.

In a divorce case, a common form of affidavit is the financial affidavit, in which each party itemizes information such as assets, debts, income, and expenses. Courts use financial affidavits to determine the division of property and spousal support. Submitting false written statements under oath can carry hefty penalties.

Foundation refers to proof or facts that back up the accuracy of evidence before that evidence can be submitted for consideration in a court case.

The specific reasons for the break-up of the marriage – such as adultery, abuse, or incarceration – that a party must prove before the court will grant the divorce.

In custody cases, a guardian ad litem is a person appointed by the court to serve as a child’s advocate and legal representative. The guardian ad litem will make recommendations that are in the best interests of the child.

A proceeding before a court.

Hearsay is secondhand testimony or testimony quoting a person who is not in court. Generally, hearsay is inadmissible in court, but there are exceptions.

Incompatibility refers to parties being so different that they can no longer live together in harmony as husband and wife. Pennsylvania recognizes incompatibility as grounds for divorce.

Written questions that one party in a lawsuit asks the other party as part of the discovery process. The party receiving the interrogatories must answer them in writing and under oath.

A court’s decision in a divorce case.

Jurisdiction refers to the authority of a particular court to decide the legal issues in a divorce case. Under state law, a Pennsylvania court can decide a divorce case if one of the spouses has lived in Pennsylvania for at least six months prior to the divorce filing.

Much like a divorce, a legal separation requires a court decision and includes rulings on issues such as child custody, spousal support, and division of assets. As the term implies, a legally separated couple lives separate and apart. However, unlike a divorce, a legally separated couple remains legally married. Couples may choose this route for a variety of reasons, including religious beliefs against divorce or so a spouse can maintain medical benefits. While most states recognize legal separation, a few, including Pennsylvania, do not. In Pennsylvania, couples can choose to live separate and apart.

When the parties in a divorce can’t agree, litigation is a means of resolving their issues in court, where a judge will make all decisions in a legally binding court order.

Maintenance is another term for spousal support or alimony. It is financial support that one spouse pays to another.

A motion is a formal request for a judge to make a legal ruling.

Of or related to a wedding or marriage.

Pendente lite is a Latin term meaning ‘pending litigation’ In a divorce proceeding, a pendente lite order grants temporary financial support to the lower-earning spouse during the divorce litigation to ensure they have the financial resources necessary to defend themselves during litigation.

Knowingly lying under oath during a divorce proceeding.

A formal written request seeking an order from the court.

The spouse who files a petition for divorce.

The one who brings a case against another in court. In the case of divorce, the plaintiff is the petitioner.

A precedent is a previously decided legal case that establishes a rule that courts use to decide future cases with similar issues or circumstances.

A prenuptial agreement is a contract signed by both spouses before the marriage that outlines each spouse’s rights to property and assets should the marriage end in divorce.

A pro se divorce is one in which a spouse chooses to represent themself without an attorney. While it may be an option in simple divorce cases, a pro se divorce is not a wise choice when there are complicated assets or child custody issues.

A Qualified Domestic Relations Order, or QDRO, is a court order that determines how retirement benefits will be divided between divorcing spouses. QDROs are complicated, technical documents.

Giving one valuable thing for another.

A rebuttal is evidence that one party submits to refute the evidence submitted by the opposing party.

A temporary court order that prohibits one spouse from doing something, such as texting or harassing the other spouse.

A separation agreement is a legally binding agreement that ensures that finances, custody, and spousal support are fully documented and enforceable. Separation agreements can map out who pays the mortgage, car payments, and other expenses, as well as temporary child support to meet basic needs, including food, clothing, daycare, and medical expenses.

Also known as maintenance or alimony, spousal support is the payment one spouse makes to financially support the other spouse during the separation or after the divorce.

Standard of living refers to the lifestyle the couple had prior to their split and includes things such as vacations, homes, clothing, and vehicles. Standard of living is one of the factors the court will use to determine alimony and the distribution of assets.

An order requiring someone to appear in court to testify or produce documents in a divorce proceeding.

A stipulation is a written agreement between spouses regarding issues related to their divorce. The court can enforce such agreements in the future, so it is important that both parties are very specific and include all details in writing to avoid potential conflicts down the road.

A document notifying one spouse that the other spouse has started a divorce case and that they must file an answer within a specified period of time.

A written or oral statement made under oath.

A written, word-for-word record of what was said during a court proceeding

Also known as a mutual consent or no-fault divorce, an uncontested divorce is one in which both parties agree the marriage is over and work together to resolve issues of child support, division of assets, and spousal support without the need for a judge. Uncontested divorces tend to be quicker and less expensive.

The location of the court that will hear a divorce case. The venue is typically the court in the county where one of the parties currently lives or where the parties lived together as a married couple before their separation.

Want to find out more about Robert M. Going, Jr. Read these articles and blogs:

Or click here to discover an even wider range of topics in our legal blog.