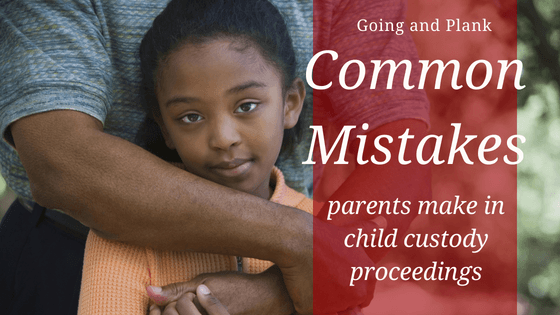 Child custody proceedings can be an emotional process. The thought of losing time with your children can make you frustrated and scared. However, your actions will be closely evaluated, so it’s more important than ever to keep your cool and stay calm. Show your children and the courts that you are a dependable, level-headed parent.

Robert M. Going, Jr. is a child custody attorney with over 30 years of experience in custody cases in Lancaster County and throughout Central Pennsylvania. We asked Bob to share some of the most common mistakes parents make during child custody proceedings. 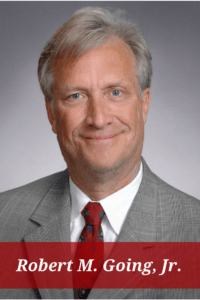 I really enjoy practicing family law in Lancaster County. It’s important to me to help families through tough times, and I try to be the kind of attorney who is compassionate and caring. After all, when you’re dealing with the custody of your children, you don’t want to talk to a lawyer who is rushed, or who isn’t completely focused on you and your situation.

If you’re getting divorced or getting ready to determine child custody, you may have to fight through some tough emotions. While you may be tempted to give in to a temper or make life tough for your spouse, that approach might actually backfire in the long-run. Sometimes good people let a bad situation get the better of them. But if you know the consequences of your actions, you may be able to make better decisions. That’s why I was happy to put together this list of the five most common mistakes people make when dealing with child custody proceedings.

Mistake: Being the One Who Walks Out of Your Marital Home

Every situation is different, but if you can be the one to stay in your home with your children, you may increase your odds of getting a more favorable custody ruling in Pennsylvania. Of course, if you or your children are unsafe, seek a Protection From Abuse (PFA) order right away. But if abuse is not a factor, staying in your home with your children often helps your custody case. If you must leave, try to do it quietly, respectfully, and without drama. Keep the emotional well-being of your children in mind. While cases vary, some judges prefer to keep the children in their current home with the parent who is residing in that home. Other judges will question the commitment of a parent who leaves abruptly, dramatically, or without consideration to the emotional well-being of their children.

Mistake: Not Respecting the Rules

Temporary interim custody orders are often issued in Pennsylvania at the onset of a divorce or paternity action. That means you’ll have to abide by these orders until your official custody hearing is held. While the restrictions of shared custody can be difficult, even heart-breaking, you must follow these interim custody orders to the letter.

Some parents are tempted to break the rules and take their children on outings without telling the other parent. Even if you’re just taking the children on a short trip to the park, or if you keep them an hour longer than permitted, you’re disobeying court orders. Custody judges are evaluating your ability to respect the other parent and the court itself. Violating the terms of custody, even just a little, may result in being assigned less visitation time, or even arrest.

While following the court-assigned custody orders may be difficult in the short-term, it could help you gain more time with your children in the long-term.

Social media has become such an accepted part of our lives that it’s sometimes easy to forget that what you say and show on social media can be shared with anyone. That’s why, during a divorce and throughout the child custody process, it’s important to be as respectful and responsible on social media as you would be in the courtroom.

Posting anything that could be seen as hurtful to your children or that portrays you as a less-than-ideal parent, even when you’re away from your children, can be used against you in court.

Remember that, in Pennsylvania, social media posts can be used as evidence that you are an unfit parent. Sometimes your posts will be used intentionally out-of-context. Play it safe, and keep your social media posts very conservative. 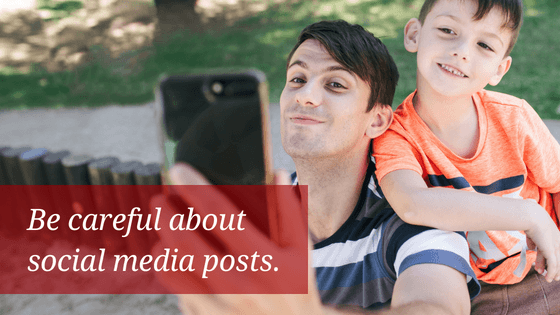 Divorces are rarely easy, and some parents will find it challenging to communicate calmly and rationally after a divorce. However, the Pennsylvania courts usually favor parents who place the welfare of their children above their own feelings.

Custody judges in Pennsylvania tend to side with parents who make sincere efforts to be reasonable and cooperative. To improve your odds in a custody case, once you’ve decided to divorce, try to shift your focus away from the spouse towards the well-being of your children. Working with your spouse to provide the best life for your kids will not only impress the courts, but it may also make the process easier for your children.

Mistake: Assuming Your Parenting Skills Will be Accurately Evaluated During Custody Proceedings

In many divorce cases, one party may believe they are clearly the better parent. They think they will have no issues getting a fair custody ruling. However, child custody proceedings in Pennsylvania are not always straightforward. Even amicable divorces can become contentious when child custody is involved, and if your spouse retains a lawyer, they may gain an unfair advantage. Many parents are heartbroken when they realize their spouse has hired a custody attorney that portrays them as an unfit parent. Don’t be surprised by unfair evaluations. Hire a child custody attorney to protect your reputation and help you fight for your custody rights.

Parents in Lancaster County and throughout Central Pennsylvania have relied on Going and Plank to help them successfully navigate the child custody process since 1956. Robert M. Going, Jr. has been practicing family law in Lancaster County for over 30 years. If you want to talk to a child custody expert, contact us at The Law Offices of Going and Plank today and schedule your consultation.

Want to read more about Child Custody? Check out these blogs.

How to Reduce Stress in Child Custody Proceedings