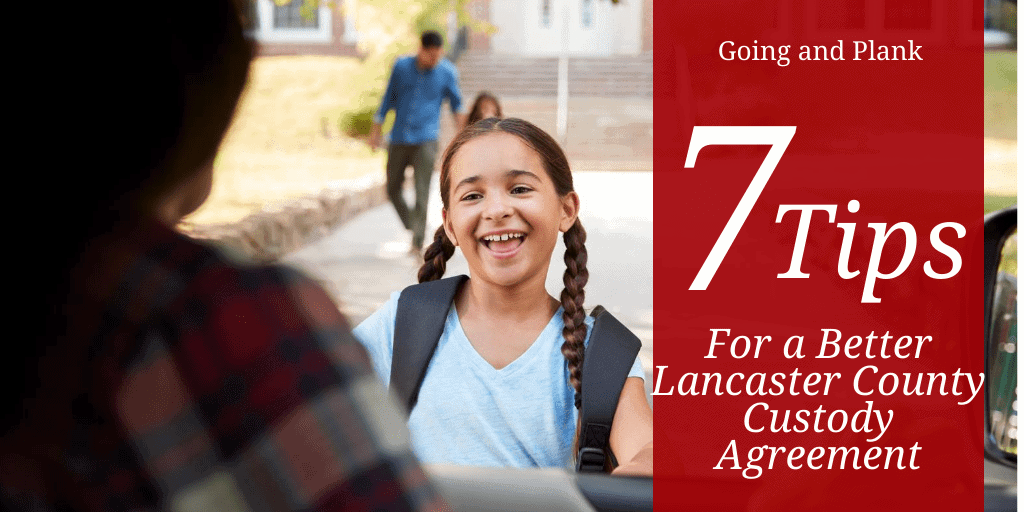 When a couple decides to divorce, it’s easy for both parties to get caught up in the circumstances that ended their relationship, feelings of hurt and anger, and stress over the financial and emotional changes that come with life after divorce. What sometimes gets lost in the mix is the toll divorce takes on children.

When emotions cloud their judgment, parents can make a host of mistakes during child custody proceedings. Fortunately, Pennsylvania child custody laws have one focus: the best interest of the child. In fact, there are a number of other factors a judge will take into consideration when making a child custody decision.

However, it’s not always easy for parents to keep the best interests of the children in mind during the heat of divorce and custody proceedings. That’s why it’s important to enlist the guidance of a Lancaster child custody attorney who can help parents follow these seven, crucial steps to ensure the best custody outcome for their children and themselves.

One: Respect the Parent-Child Bond

In Pennsylvania, a judge will award custody based on what is in the best interest of the child, and in most cases that is a relationship with both parents. As difficult as it may be in a contentious divorce, mothers and fathers must respect the importance of the child-parent bond and allow their ex to spend one-on-one time with their children. Strong parent-child relationships play a key role in the offspring’s health and well-being, and fostering such relationships takes a commitment from both parents. Couples who focus on bitterness and attempt to exact revenge on an ex-spouse by depriving them of that bonding time are less likely to find favor with a custody judge.

Putting a child’s needs first should always be a top priority, but it is even more important during child custody proceedings. A child requires more than food, clothing, and a roof over their head. They also need dependable parents and emotional stability.

This is not the time to let financial and emotional pressures or work responsibilities come before needs of the children. During the custody proceedings, parents should avoid working extra hours at work or taking on new commitments that keep them spending time with their children. It’s important that parents take full advantage of whatever time they have in a temporary custody arrangement and spend time with their children, including time spent on everyday tasks like making dinner, picking them up after school, or shuttling them to and from extracurricular activities.

While some divorces are amicable, most are never easy. More often than not, parents feel anger or animosity toward one another. They may experience high levels of emotional stress, along with the pressures of altered finances and single parenting. But it’s important for parents to realize is that divorce also creates anxiety for the kids. Even the youngest children will feel more anxious. Matters only get worse when youngsters pick up on the stress and anger between parents.

Complaining about a spouse in front of the children, fighting with an ex in front of the children, and creating difficulties with pickups and drop-offs ultimately hurts the children. Putting a child’s best interests first means finding ways to reduce the drama and anxiety in their lives. As challenging as it may be, parents must learn to compartmentalize hostility toward their children’s parents. Enlist the help of trusted friends and family to make child exchanges easier, if necessary.

Four: Be Open to Co-Parenting

Pennsylvania courts often look unfavorably on an angry parent who is unwilling to compromise with an ex. While a mother or father may try to use sole custody as a way of depriving their ex-spouse of time with the children, it’s rarely a good idea. Seeking sole custody can also fuel animosity and can result in a longer, uglier court battle.

Unless an ex-spouse is unfit or a danger to the child, or the parents live too far apart to reasonably share physical custody, a judge will generally consider co-parenting in the child’s best interest. There are many shared custody arrangements available to suit individual family situations. To make that work, however, parents must be able to put their differences aside and communicate effectively about everything from daily and weekly schedules to important legal, medical, and educational decisions in the child’s life.

For parents who find that relationship difficult to achieve, a Lancaster custody lawyer can serve as an effective mediator, offering level-headed guidance.

While parents usually document the time they spend with their children, keeping such a journal during divorce and custody proceedings could be an important proof of dedicated, responsible parenting, especially if an ex wants to challenge parenting ability or custody in the future.

Having to prove that one is a good parent may be painful, and even challenging, but thorough documentation can help. Consider recording things like wake-ups and bedtimes, a child’s mealtimes and what they ate, visits and outings along with the names of people who were at those events, doctor appointment invoices, receipts, parent-teacher conferences, and more. Sharing that information with an ex-spouse via text or email is also an effective way to avoid lengthy and stressful in-person encounters, plus it provides written proof to a judge of a willingness to communicate.

It seems like everyone wants to share their opinions on social media, and it can be tempting to complain about an ex-spouse on Facebook. Don’t do it. Ultimately, nothing shared on social media is private or secure. In Pennsylvania, an opposing attorney can use social media posts as evidence of unfit parenting. Those Facebook rants about an ex can find their way before a custody judge, who may question whether such an angry person can effectively co-parent.

Another no-no is complaining about court proceedings on social media, especially if a judge has instructed both parties to avoid discussing the case in public. It’s also a good idea to skip posting private information about the children, photos of a new boyfriend or girlfriend, or pictures from a night on the town.

In the stress of divorce, it’s easy to forget what is really best for the child and make mistakes that can jeopardize a favorable custody agreement. A Lancaster child custody lawyer can offer objective, unemotional guidance to help parents avoid common pitfalls and make decisions that are in the best interest of their children. A custody attorney can also negotiate, manage complicated paperwork and documentation, handle court proceedings, and help review all options to get the best possible custody agreement for parent and child. They will also expedite hearings and ensure fair treatment in matters of alimony, temporary custody, and child support.

An experienced Lancaster custody attorney can help parents navigate through the difficult divorce and custody process while acknowledging the unique challenges of their specific family situation. The Law Offices of Going and Plank in downtown Lancaster offer decades of experience in family law and finding solutions that are best for all involved. Contact them today for a free consultation.

Learn more about child custody matters in Lancaster County in these articles.