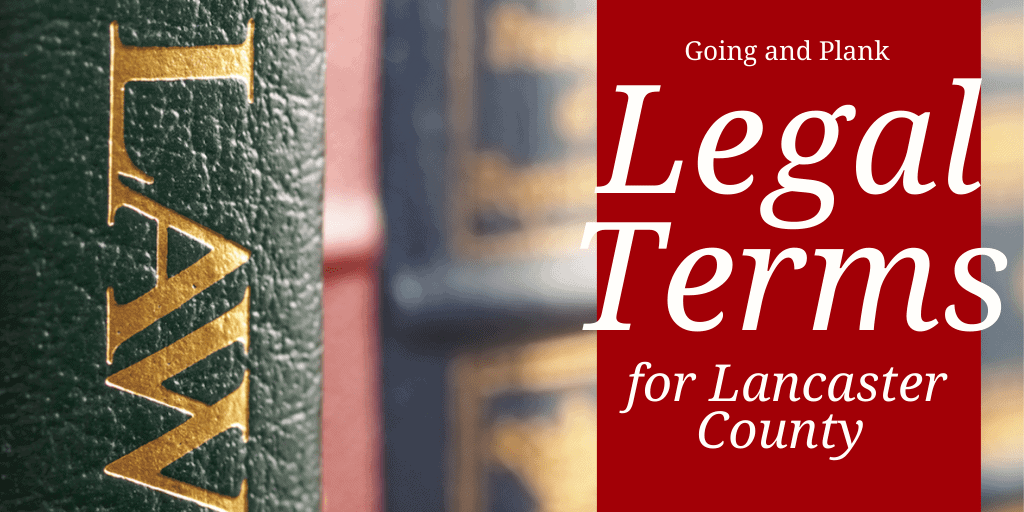 Starting a business, association, or private club in Lancaster County carries many challenges, whether it’s choosing the right format for organizing a business, understanding the legal parameters of charters, or creating sound employee contracts or membership agreements.

Understanding these legal terms and seeking the advice of an experienced business law attorney can ensure that businesses and associations follow legal requirements, minimize risk, and set themselves up for success.

In the case of a business contract, acceptance means to agree verbally or in writing to the terms of the contract. Acceptance is necessary for a contract to be legally binding and enforceable.

Incorporate terms, articles of association refers to a document that defines a company’s purpose and the regulations for how it will operate, including how it will appoint directors and handle financial records.

A group of people who join together as an organization for a particular purpose.

An agent is someone who is authorized by another person to conduct business affairs on their behalf.

Arbitration is a form of dispute resolution in which two contesting parties allow an impartial third party to resolve their dispute, and they agree that the ruling will be final and binding.

In a valid business contract, both parties exchange something of value, such as money for goods or services. A breach of contract occurs when one party doesn’t live up to their end of the agreement.

The elected governing body of a corporation that represents shareholders, establishes policies for management and oversight, hires senior executives, and sets company goals among other responsibilities.

A collective agreement is a contract between an employer and a union representing its employees. It covers issues such as wages, benefits, terms and conditions of employment, working conditions, and the process for resolving disputes.

A type of corporation that is taxed separately from its owners. C corporations can have an unlimited number of shareholders who are not liable for the debts of the corporation. They can also accept investments from other corporations. However, C corporations also are subject to double taxation since profits are taxed at the corporate level and then again as dividends on the tax returns of individual shareholders.

A comfort letter is similar to a letter of reference. It is typically written by an independent auditor to assure one party that another party is able to meet a financial obligation or fulfill the terms of a contract that is under consideration.

A company seal is an official mark, often bearing the company’s name, that a company can either stamp or emboss on an official or legal document. The seal signifies that the company agrees with the contents of the document.

Conditions are requirements that must be met before a party has to fulfill the obligations of a contract. A real estate contract, for example, might have the condition that the seller has to make certain repairs to the property before the buyer writes the check.

An agreement that requires one or both parties to keep shared information secret, private, and confidential.

In contract terms, consideration is something of value that each party in a contract receives or expects to receive when they enter into the contract. In a valid contract, both parties must receive some form of consideration, whether it is money, goods or services, or the promise that someone will act or refrain from taking certain actions.

Common interest developments are housing developments where residents individually own their homes and units and share ownership in common areas and amenities. All residents can enjoy those common areas, such as swimming pools, clubhouses, and fitness centers, that they otherwise could not afford on their own. A homeowners’ association manages a common interest development and homeowners pay a fee to maintain those common amenities.

Consumers are individuals or businesses that purchase goods and services.

CC&Rs are the written rules for members of a homeowners’ association in a common interest development. CC&Rs can cover everything from the type of pets homeowners can have to changes they can make to their property. Violating these rules can result in fines, suspended use of common facilities, and even lawsuits.

Due Diligence is the homework a reasonable individual or business should do to avoid harm before entering into a contract. If someone is purchasing a business, for example, due diligence would include things like examining the business’s finances and making sure there is a market for the goods or services the business sells. For an employer, due diligence would include checking a prospective employee’s references, background, and training before hiring them.

An employment contract is an agreement between an employer and an employee at the time of hiring that outlines their working relationship, including salary and wages, time off, privacy policies, confidentiality agreements, and conditions for terminating the contract among other things.

An employee handbook is a document employers can use to outline their mission and vision along with human resources information such as pay schedules, benefits, paid and unpaid leave policies, harassment and discrimination policies, and dispute resolution procedures. Companies should have a well-crafted employee handbook and view it as a legal document that can offer a measure of protection against wrongful termination lawsuits.

An exclusion clause is a term in a contract that excludes or limits the liability of one of the parties under certain circumstances. For example, a life insurance contract might include an exclusion clause stating there will be no payment in cases of death by suicide.

In a business contract, express terms are terms that both parties specifically mention and agree upon either orally or in writing. Implied terms, on the other hand, are terms that are not actually written into the contract but that a court would assume were intended to be included in the contract. Implied terms typically involve issues of good faith and fair dealing. It is implied, for example, that an employee will not steal from an employer or misuse a company’s database.

Preliminary evidence or questions to a witness that establish the admissibility of other evidence in a court proceeding.

A general partnership is a business arrangement where two or more people agree to have an equal share in profits as well as any financial and legal liability. Owners pay taxes on their profits on their personal tax returns.

A going concern is a financially stable company that is expected to continue operating into the foreseeable future.

A homeowners association is a nonprofit organization that manages and maintains a community. Residents of the community make up the membership of the HOA and elect a volunteer board from its membership. The board creates and enforces guidelines for the community and its shared spaces. HOAs typically collect a monthly fee from its members to cover insurance, landscaping, and maintenance.

To incorporate a business means to turn the business into a separate legal entity that is independent of its owners and recognized by the state.

In a partnership of two or more people, joint liability refers to the fact that all partners share equally in liability for any debts or legal action taken against the business.

A joint venture is a business arrangement where two or more companies pool their resources and skills to achieve a particular goal.

The legal responsibility that someone has for something they did or failed to do. When an individual or a business does not meet that responsibility, they could leave themselves open to a lawsuit. In business, liability also refers to a company’s debts.

Selling the assets of a business to pay bills and dividing what is left among the shareholders.

A liquor license is a government-issued permit to serve or distribute alcoholic beverages. The owner of the license must follow all Pennsylvania Liquor Control Board regulations. Pennsylvania has a quota system that allows for one liquor license for every 3,000 county residents. Once the county reaches its quota, the state will not issue any more licenses.

An LLC shares characteristics of both a partnership and a corporation. The owners of an LLC have the liability protection of a corporation, but the tax advantages of a partnership since the profits and losses pass through their personal income without paying corporate taxes.

A misrepresentation is a false or misleading statement that one party makes to convince another party to enter into a contract.

An offer is a proposal to enter into an agreement with someone. An offer by one party and the acceptance of the offer by another party are the essential components of a contract.

A quorum is the number of members of a board, homeowners association, or other organization that must be present at a meeting for the group to conduct business. A quorum is typically a majority of members, but an organization can specifically define that number in its bylaws.

Private clubs are places where dues-paying members gather to share a common interest. They are not open to the general public. Private clubs are not for profit and generally form around a social, fraternal, military, recreational, athletic, political, or other common purpose. State laws govern the creation and administration of private clubs and regulate how they raise money.

When one party in a contract either denies the existence of the contract or informs the other party that they will not honor the contract.

An agreement among the shareholders of a small corporation that allows a shareholder to hold a management position without fear of a conflict of interest claim.

In a contract, an unfair term is a condition, such as an exclusion of liability or a harsh penalty, that takes advantage of one party’s weakened bargaining position.

A contract that has no effect and that cannot be enforced, such as a rescinded or fraudulent contract.

A warranty is a written statement verifying the quality of a product or that a fact stated in a contract is true.

The Law Offices of Going and Plank in downtown Lancaster can help Lancaster Countians determine the best format for organizing their businesses, draft bylaws and articles of incorporation, secure EIN tax numbers and company seals, create sound business contracts, and offer legal representation. Contact them today for legal assistance in all business matters.

Retain a Lancaster Business Attorney to Secure Your Business Contracts or Theirs!

Starting or Reorganizing a Business? Understanding the Legal Language of Business Structures Can Help.

Choose the Business Form That’s Right for You.

Why Your Lancaster County Business Needs an Experienced Business Attorney